To say that the Otter Pond of today is not the Otter Pond of yesteryear harks to a profound pond-altering event that took place in 1793. For in that year the Trustees of the Town of Southampton transferred to Sag Harbor resident John Jermain the right to dig a channel to connect the freshwater pond with Sag Harbor’s Upper Cove. During the 219 years that have since passed, the pond’s ecology evolved from that of an enclosed freshwater pond to one characterized by fish and surrounding vegetation consistent with a tidal saltwater pond, though one that also does receive fresh groundwater feed. At its deepest, the pond measures 35 feet.

That same John Jermain was also granted the right to build a bridge over the new channel, specified to be at least 12 feet wide to accommodate all types of carriages. The most recent iteration of the bridge, considerably wider than 12 feet, offers sidewalk vantage points on each side of Main Street where the inrushing and outrushing of the tide can be witnessed. In the 2012 spring and early summer season in which we saw the water levels in all the Long Pond Greenbelt’s freshwater ponds dropping unusually low, Otter Pond’s fullness spoke to the daily influx of waters from the sea. 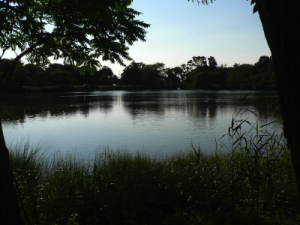 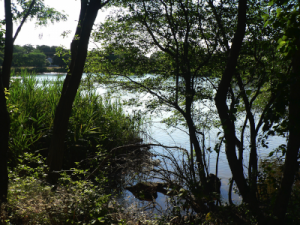 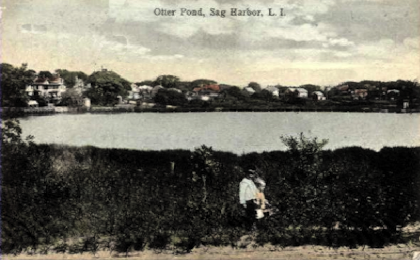 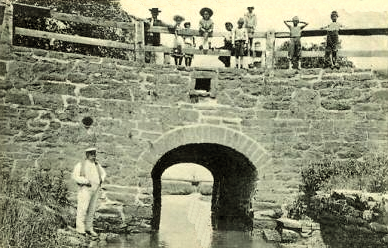 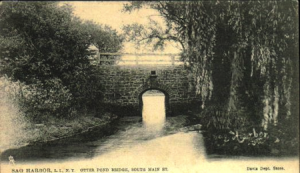 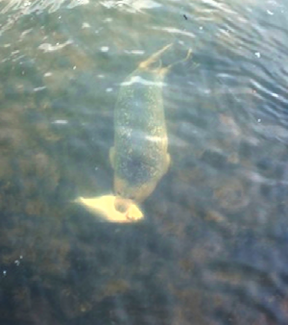 The pond, the bridge, and the surrounding parkland form one of Sag Harbor’s most notable landmarks. Sitting at the intersection of the Bridgehampton/Sag Harbor Turnpike, Jermain Avenue, and Brick Kiln Road, at the southern gateway to the village and across the street from Mashashimuet Park, it has for centuries been a focal point of village life. Its shores have seen houses and mills come and go, but its current character was set in motion when, in 1908, Sag Harbor’s most prominent benefactress, Mrs. Russell Sage, purchased the pond and its surroundings, had the existing buildings removed, and two years later donated it all to the park association managing Mashashimuet. Today the pond is primarily a visual amenity, providing a beautiful view upon entering the village. While benches and lawns do provide visitors comfortable places to stop and enjoy the peaceful scene, in former times, it could be a bustling place.

In the early 1900s, for instance, when a small wading beach was opened, not only did children participating in a park program get to use it, it has been reported that in a single day around that time close to 200 people visited it for a quick swim. That’s a lot of folks. In the winter skating parties were common, too. One Internet blogger from Sag Harbor says that the bridge used to have gates that were closed in the winter to keep saltwater from entering the pond and that it was used for skating until the early 1960s.

Stepping further back to the early 1800s, fish and eel abounded in Otter Pond. One historian reports that in 1806, 3,600 fish were caught in one haul and that in 1818, the year that the pond was opened to eeling, 54 dozen eels were taken in a few hours’ time one December day. Fishing at the pond continues here in the 21st century: it’s the occasional recreational fisherman or fisherwoman who’s seen at the pond’s edge, generally at the point where the channel funnels into the pond.

Otter Pond has lent its name to one of the Sag Harbor Fire Department’s companies — the Otter Hose Company No. 3 — to a supper club — the House on Otter Pond, during the 1970s, a bed and breakfast currently operating nearby — the Otter Pond House — and probably many other enterprises over the centuries.

Since otters are known to have been close to extinction on Long Island since the early 1800s, it is a testament to the power of history that place names endure long after the original reason for their designation. A recent event, however, poses the possibility of something new. In December of 2010, neighbors of the pond sighted a seal coming in and out of the pond, catching fish inside and then swimming back out to the cove to eat their catch (see below). Has the time come, perhaps, to change the name from Otter Pond to Seal Pond?

Thanks to Bob Wolfram for his wonderful collection of postcards of old Sag Harbor, to Dorothy Zaykowski for her terrific history of Sag Harbor (Sag Harbor: The Story of an American Beauty), and to the Sag Harbor Express for permission to reprint the seal photographs.